allstaractivist note: What did I ever do to Youtube to cause them to join in on the attack that seems to be coming from every direction? Is it just because I’m such a super giant asshole or, does it actually have more to do with an agenda aimed at all Targeted Individuals? Now, don’t get me wrong, I’m supposed to be retired, it says so right here in this post. But come on, when they keep on attacking me from over here and from way over there and then right up in my face… well, you tell me, am I just supposed to shut up and take it? This latest attack is so onerous that I am even begrudgingly obliged to say the name I promised to never utter again. Unfortunately, he who’s name I would rather leave unspoken just so happens to be the only media personality complaining about this very same thing (Alex Jones). Youtube messes with the view counts of all those deemed to be on the wrong side of the existential/political fence.

So here I go again, dragged kicking and screaming back out of retirement to yet once again, put up my dukes. I know that the shadowy government, New World Order Globalist Mafia, who have been dogging my existence ever since I can remember, have been trying to paint me as some kind of Schizophrenic kook hell bent on committing wanton acts of violence with all manner of bladed tools and weapons. News stories of stabbings here, hatchet attacks there, swords everywhere, fill the airwaves and come spewing out of the nightly TV News broadcast’s talking heads. Until I started open carrying, you never used to hear of them. Oh well, maybe it’s just my Paranoid Schizophrenia acting up again. Tomorrow, I’ll be sure to take a double dose of sanity.

Wait a minute, I just took a look see on the trusty ole Youtube and blithely ventured down to the bottom of my videos page (via the “load more” button) and what did I find? Hey, my knife throwing video has the exact same view count that it did the last time I checked about a year ago.  All the rest of the knife throwing videos have way higher view counts and they haven’t even been up as long as mine has, three years! Is someone playing a joke on me? Come on guys, cut it out. Such kidders.

To be fair, I then edited the description to include an explanation that my closest companions, who are sometimes called Gang Stalkers, were most likely responsible for the count and that anyone who thought me to be the Anti-Christ were just being bamboozled. Ha, ha, ha, jokes on me guys, you got me good. Within thirty minutes of editing the view count somehow miraculously changed and slowly started rising, See, when you are fortunate enough to have companions who surveil you as closely as I have, you need only whisper to get action. Why, sometimes, they even seem to read your very thoughts.

Knowing my companions, impish pranksters that they are, I decided to do a search by name for the video just in case. Sure enough, the little gremlins had been ever so clever and thorough. The view count for the search results still read 666 even though the count on the actual video page was higher. Ok, better document this cause people might not believe I have such mischievous “friends”. You can view my subsequent screenshots for yourself and if you aren’t too afraid, you can watch my knife throwing video too. Just be sure to say a prayer before you do though, I wouldn’t want to be responsible for your head spinning all the way around or anything like that, 666 and all…

UPDATE 12-29-16: The day after making this post, the view counts miraculously unfroze and started climbing, both in the search results, as well as on the video page itself. Not once did I ever contact Youtube to complain, didn’t need to since I’m being monitored (survielled). 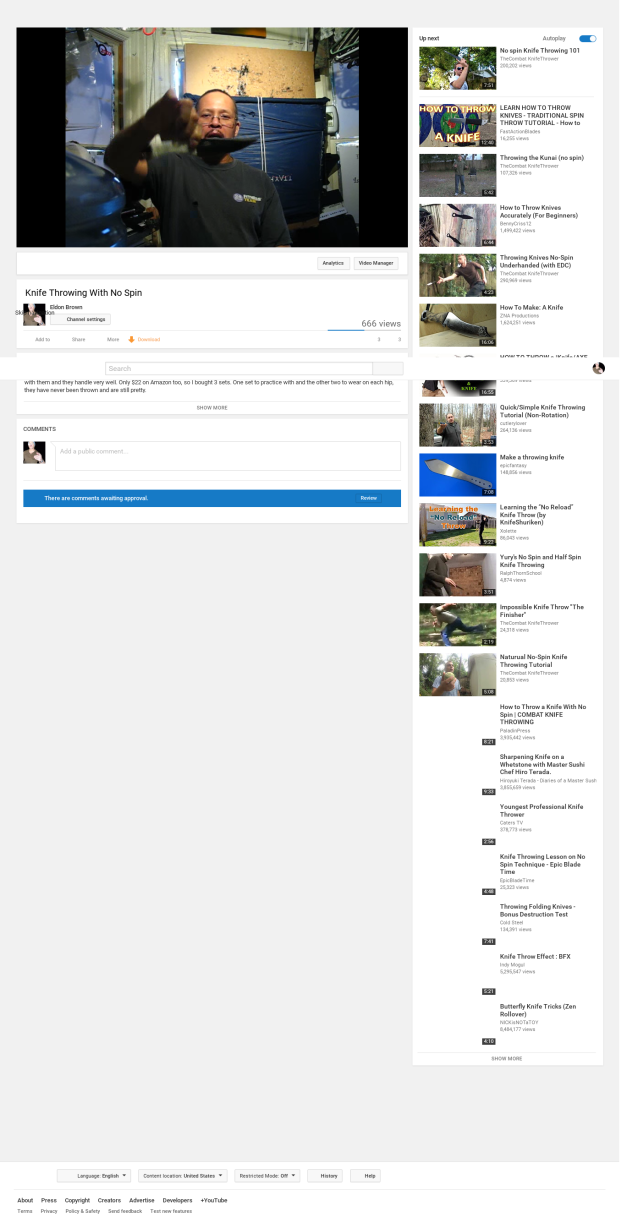