Moscow’s Remote-Controlled Heart Attacks – and ours too…

allstaractivist note: These types of weapons have been around for a very long time, probably since the heyday’s of Nikola Tesla and Guglielmo Marconi back at the turn of the century. Tesla used to get run out of town by townsfolk wielding pitchforks because some of his experiments terrified them. His experiments caused earthquakes, brilliant flashes of light that turned night into day and even one report of both people and objects levitating near his laboratory. Well, I can tell you that whatever weapon is being used to gas me is far ahead technologically speaking,  than the “conventional” tech described below. They (military) are so far ahead of what we know it might as well be magic. Perhaps it is ancient knowledge either handed down or rediscovered. What do you think Hitler was looking for? Anyway, don’t let people tell you that satellites are responsible, that is just a cover. They have stuff that the Fallen Angels gave them, a real power imbalance with which to purge all of mankind with. The DEW‘s below are merely the “conventional” technologies that killed my friends and neighbors, not what is being used on me all of the time. I am a beneficiary of esoteric weapons knowledge. The only court to be found for the people utilizing this evil technology will most likely be on Judgment Day and no, I am not a Luddite, just read my technology posts to see. I just happen to believe that the highest tech is in the hands of evil people (technology stolen from Heaven).

This is the second of David Hambling’s two-part series on plasma and electromagnetic weapons. Check out part one here.

The American military may want to attack the nervous system, with pain rays and laser plasma pulses. But they’re not the only ones. The Russians have long studied such systems, too — including one weapon that could, in theory, remotely trigger heart attacks.

In 2003, at the 2nd European Symposium on Non-Lethal Weapons, Anatoly Korolev and his colleagues from Moscow State University presented a paper with the snappy title “Bioelectrodynamic Criterion of the NLW Effectiveness Estimation and the Interaction mechanisms of the multilayer Skin Tissues with electromagnetic Radiation.” This is a study of how radio-frequency weapons — like the American Active Denial System — affect the skin. After wading through a mass of technical data showing how complex the interactions are we reach the punch line:

The sensations modality (pricking, touch, pressure, gooseflesh, touch, burning pain etc) depends on the field parameters and individual concrete human being factors. As a matter of fact, we can really choose the non-lethal bioeffect.

The effects include sensations similar to those discussed previously, and more besides. The paper discusses effects on cell membranes and affecting the bodys normal function, including “information transfer to the organs of control.“

At the same conference, V Makukhin of the Trymas Engineering Center in Moscow described “Electronic equipment for complex influence on biological objects.” And when he says “biological objects,” he means you and me.

His laboratory apparatus uses a modulated beam of radio waves to produce what he terms “disorder of autonomic nervous system,” put forward as a possible non-lethal weapon. Makhunin notes that there is no general agreement on how EM waves disrupt nerves — he mentions ion channels similar to those in the plasma paper — but he certainly seems to be seeing the same effects as American researchers.

But it need not be a non-lethal weapon. Makhunin also mentions the effects of “change of electrocardiogram” and what he calls “function break of heart muscle.“

The vulnerability of the heart to electrical stimulation (including that produced by EM waves) is well documented. A lethal device would interfere with the electrical potentials that keep the chambers of the heart synchronized, producing fibrillation and rapid death. A death ray doesnt need to be a truck-sized laser that reduces the target to smoking heap; a small device that stops the heart will do the job.

Little has been openly published in this area in the public domain, but this may be the tip of the iceberg. We are likely to be hearing more in future — especially if the Russians manage to find funding.

I dont think we need tinfoil hats just yet. But a layer of conducting mesh built into body armor might save a lot of heartache in years to come.

(If you want more, theres a whole chapter on different non-lethal directed energy weapons and where the technology might lead in my book Weapons Grade. )
– David Hambling

Sonic and ultrasonic weapons (USW) are weapons of various types that use sound to injure, incapacitate, or kill an opponent. Some sonic weapons are currently in limited use or in research and development by military and police forces. Others exist only in the realm of science fiction. Some of these weapons have been described as sonic bullets, sonic grenades, sonic mines, or sonic cannons. Some make a focused beam of sound or ultrasound; some make an area field of sound. 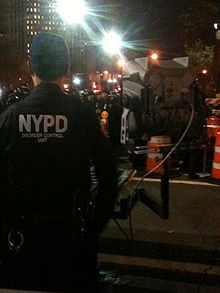 An NYPD officer stands ready with the LRAD 500X at an Occupy Wall Street protest on November 17, 2011 near the city hall

Extremely high-power sound waves can disrupt or destroy the eardrums of a target and cause severe pain or disorientation. This is usually sufficient to incapacitate a person. Less powerful sound waves can cause humans to experience nausea or discomfort. The use of these frequencies to incapacitate persons has occurred both in counter-terrorist and crowd control settings.

The possibility of a device that produces frequency that causes vibration of the eyeballs — and therefore distortion of vision — was apparently confirmed by the work of engineer Vic Tandy[1][2] while attempting to demystify a “haunting” in his laboratory in Coventry. This “spook” was characterised by a feeling of unease and vague glimpses of a grey apparition. Some detective work implicated a newly installed extractor fan that, Tandy found, was generating infrasound of 18.9 Hz, 0.3 Hz, and 9 Hz.

A long-range acoustic device has been used by the crew of the cruise ship Seabourn Spirit to deter pirates who chased and attacked the ship.[3] More commonly this device and others of similar design have been used to disperse protesters and rioters in crowd control efforts. A similar system is called a “magnetic acoustic device”.[4] ‘mobile’ sonic devices have been used in Grimsby, Hull and Lancashire to deter teenagers from lingering around shops in target areas. The device works by emitting an ultra-high frequency blast (around 19–20 kHz) that teenagers or people under approximately 20 are susceptible to and find uncomfortable. Age-related hearing loss apparently prevents the ultra-high pitch sound from causing a nuisance to those in their late twenties and above, though this is wholly dependent on a young person’s exposure to high sound pressure levels.

High-amplitude sound of a specific pattern at a frequency close to the sensitivity peak of human hearing (2–3 kHz) is used as a burglar deterrent.[5]

Some police forces have used sound cannons against protesters, for example during the G20 summit in Pittsburgh.[6]

Studies have found that exposure to high intensity ultrasound at frequencies from 700 kHz to 3.6 MHz can cause lung and intestinal damage in mice. Heart rate patterns following vibroacoustic stimulation has resulted in serious negative consequences such as atrial flutter and bradycardia. [7] [8]

The extra-aural (unrelated to hearing) bioeffects on various internal organs and the central nervous system included auditory shifts, vibrotactile sensitivity change, muscle contraction, cardiovascular function change, central nervous system effects, vestibular (inner ear) effects, and chest wall/lung tissue effects. Researchers found that low frequency sonar exposure could result in significant cavitations, hypothermia, and tissue shearing. No follow on experiments were recommended. Tests performed on mice show the threshold for both lung and liver damage occurs at about 184 dB. Damage increases rapidly as intensity is increased.[citation needed] The American Institute of Ultrasound in Medicine (AIUM)has stated that there have been no proven biological effects associated with an unfocused sound beam with intensities below 100 mW/cm² SPTA or focused sound beams below an intensity level of 1 mW/cm² SPTA.[9]

Noise-induced neurologic disturbances in scuba divers exposed to continuous low frequency tones for durations longer than 15 minutes has involved in some cases the development of immediate and long-term problems affecting brain tissue. The symptoms resembled those of individuals who had suffered minor head injuries. One theory for a causal mechanism is that the prolonged sound exposure resulted in enough mechanical strain to brain tissue to induce an encephalopathy. Divers and aquatic mammals may also suffer lung and sinus injuries from high intensity, low frequency sound. This is due to the ease with which low frequency sound passes from water into a body, but not into any pockets of gas in the body, which reflect the sound due to mismatched acoustic impedance.[10]

In fiction and popular culture

Sonic weaponry features in the 18th volume of Hergé‘s Tintin adventures, The Calculus Affair. Professor Calculus invents ultrasonic devices which at first break various domestic items, but which can be weaponized to destroy metal, buildings and tanks.[11]

The 1939 Soviet novel The Mystery of the Two Oceans by Grigory Adamov is centered around a submarine containing numerous new technologies, including an ultrasonic cannon (with multiple settings optimized against either organic or inorganic matter). Small guns based on the same principle are carried by its crew.

In David Lynch’s Dune the movie a handheld sonic weapon that amplifies the human voice into destructive energy is used (watch video: https://www.youtube.com/watch?v=Xsh8GoWudz0)

In Ayn Rand‘s Atlas Shrugged, the State Science Institute develops Project X (for xylophone), a sonic weapon of mass destruction intended to support the totalitarian government. Misuse or malfunction (it is unclear which) of Project X destroys the last remaining railroad bridge across the Mississippi River and triggers the final collapse of society.

In the tabletop game Warhammer 40k, the noise marines of the Emperor’s Children legion use a variety of Sonic Weaponry on the battlefield.

In MicroProse‘s 1995 computer game Terror from the Deep, mankind can make use of sonic weaponry to defend against the aquatic alien threat.[12]

In the Command and Conquer series of games, by EA, the Global Defense Initiative uses sonic weapons extensively.

In Infinity Ward’s 2013 video game Call of Duty: Ghosts, a ship mounted sonic sonar ping is used to detect and kill hostile divers, via liquifaction of organs and bone.

In the song Experiment IV by the English singer Kate Bush (released as a single on 27 October 1986), sound was described as having been turned into a weapon as part of a government contracted experiment.

The two assassins with Hands of Blue in Firefly use a small sonic weapon to cause fatal bleeding in their targets.

In “The Honor of the Queen” of the “Honoverse” military science fiction book series, main character is wounded by sonic pistol and personal sonic weapons are in some societies recognized as “advanced”.

In the television series ‘Doctor Who’ the Doctor has a sonic screwdriver that can disable machinery.

In the television series ‘The Flash’ the ‘Pied Piper’ uses his ultrasound gloves to compromise structures.