“Those (Jews) who stayed behind lived dangerously, without any legal rights.”

Essentially, this is what Obama’s NDAA does. Who needs a judge when you have no legal rights?

Roland Freisler (30 October 1893 – 3 February 1945) was a prominent and notorious Nazi lawyer and judge. He was State Secretary of the Reich Ministry of Justice and President of the People’s Court (Volksgerichtshof), which was set up outside constitutional authority. This court handled cases of political actions against Adolf Hitler‘s dictatorial regime by conducting a series of show trials.

In contrast to most of the Nazi leadership, not much beyond basic detail is known about Freisler. He was born on 30 October 1893 in Celle, the son of Julius Freisler (20 August 1862 in Klantendorf, Moravia – ??), an engineer and teacher, and Charlotte Auguste Florentine Schwerdtfeger (30 April 1863 in Celle – 20 March 1932 in Kassel).[1] He was baptized as a Protestant on 13 December.[2] Roland had a younger brother, Oswald (29 December 1895 inHamelin – 4 March 1939 in Berlin). Roland saw active service during World War I. He was an officer cadet in 1914, and by 1915 he was a Lieutenant.[1] He won the Iron Cross of both classes. In October 1915, after fighting and being wounded at the Eastern front, he was captured by Russian troops.

While a prisoner of war in Russia, Freisler learned Russian. He is said to have developed an interest in Marxism after the Russian Revolution; the Bolsheviksmade use of him as a commissar for the camp’s food supplies.[3] It is also said that after the prisoner camps were dissolved in 1918, Freisler became a convinced Communist, though this is not supported by any contemporaneous documents.[4] However, historian H. W. Koch states that after the Bolshevik Revolution, the POW camps in Russia were handed over to German administration, and the title of commissar was merely functional, not political, and that “Freisler was never a Communist, though in the early days of his NS career […] he belonged to the NSDAP’s left wing.”[5]

Freisler himself rejected all accusations that he had even tentatively approached the hated enemy, but he could never fully escape the stigma of being a bolshie.[3]

He returned to Germany in 1920 to study law at the University of Jena, becoming a Doctor of Law in 1922. From 1924, he worked as a lawyer in Kassel. He was also elected a city councillor, as a member of the Völkisch-Sozialer Block (German, roughly “People’s Social Block”), an extreme nationalist splinter party.

In 1928, he married Marion Russegger. Together, they had two sons, Harald and Roland.

Involvement with the Nazi Party

Freisler joined the Nazi Party in July 1925. He registered with the NSDAP as member number 9679.[3] During this period, he served as defense counsel for members of the nascent Party who got into trouble with the law. He was also a delegate to the Prussian Landtag, or state legislature, and later he became a member of the Reichstag.

In 1927, the Gauleiter of Kurhessen, Karl Weinrich, characterized Freisler in the following manner:

Rhetorically Freisler is equal to our best speakers, if not superior. Particularly on the broad masses, he has influence, but thinking people mostly reject him. Party Comrade Freisler is only usable as a speaker. He is unsuitable for any leadership post, since he is an unreliable and moody person.[citation needed]

Freisler’s mastery of legal texts, mental agility and overwhelming verbal force combined well with strict adherence to the party line and the corresponding ideology, so that he became the most feared judge and the personification of the Nazis’ “blood justice“. Despite his undisputed legal competence, he was never appointed to cabinet. According to Uwe Wesel (de), this can be attributed to two factors.[4] Firstly, Roland Freisler was regarded as a lone fighter and had no influential patron.

Secondly, he was compromised by his brother Oswald’s actions. Oswald Freisler, though also a Nazi, appeared as the defense counsel in politically significant trials which the Nazis sought to use for propaganda purposes. Oswald even wore his Nazi Party badge in court, which confused the Party’s role in these trials. Propaganda minister Joseph Goebbels accordingly reproved Roland Freisler and reported the incident to Hitler, who, for his part, decreed the immediate exclusion of Oswald Freisler from the party.

According to Guido Knopp, however, Goebbels was the only Nazi leader well disposed towards Freisler. In 1941, at a round-table discussion in the Führer‘s headquarters, Goebbels proposed Freisler to replace Reich Justice Minister Franz Gürtner, who had died. Allegedly, Hitler‘s dismissive retort was: “That old Bolshevik? No!”[3] Uwe Wesel reports a similar remark by Hitler.[4]

Contribution to the Nazification of the law

Freisler published an article on “Die rassebiologische Aufgabe bei der Neugestaltung des Jugendstrafrechts (“The racial-biological task involved in the reform of Juvenile Criminal Law”).[6] Freisler argued that “racially foreign, racially degenerate, racially incurable or seriously defective juveniles” should be sent to juvenile centres or correctional education centres and be segregated from those who are “German and racially valuable.”[7]

He strongly supported rigid laws against Rassenschande (“race defilement”, the Nazi term for sexual relations between “Aryans” and “inferior races”) as racial treason. In 1933, Freisler published a pamphlet that called for banning “mixed-blood” intercourse, regardless of the kind or proportion of “foreign blood” involved, which faced strong public criticism and, at the time, no support from Hitler. This led to conflict with his superior, Franz Gürtner.[8]

In October 1939, Freisler introduced the concept of ‘precocious juvenile criminal’ in the “Juvenile Felons Decree”. This decree “provided the legal basis for imposing the death penalty and penitentiary terms on juveniles for the first time in German legal history”.[9] In the period 1933 through 1945, the courts sentenced at least 72 German juveniles to death, among them 16-year-old Helmuth Hübener, found guilty of high treason for distributing anti-war leaflets in 1942.

The “Decree against National Parasites” (September 1939) introduced the term perpetrator type, which was used in combination with another Nazi term, parasite, The adoption of racial biological terminology portrayed juvenile criminality as parasitic, implying the need for harsher sentences. Freisler justified the new measures in the following manner: “In times of war, breach of loyalty and baseness cannot find any leniency and must be met with the full force of the law.”[9]

Presidency of the People’s Court

A meeting of the four Nazis who imposed Nazi ideology on the legal system of Germany. From left to right: Roland Freisler, Franz Schlegelberger, Otto Georg Thierack, and Curt Rothenberger. 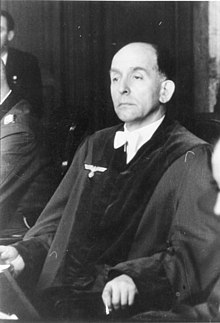 On 20 August 1942, Hitler promoted Otto Georg Thierack to Reich Justice Minister, replacing the retiring Schlegelberger, and named Freisler to succeed Thierack as president of the People’s Court (Volksgerichtshof). This court, set up outside the frame of law, had jurisdiction over a rather broad array of “political offences”, including black marketeering, work slowdowns, and defeatism. These actions were viewed by Freisler’s court as Wehrkraftzersetzung (undermining defensive capability) and were accordingly punished severely, the death penalty being meted out in numerous cases. The People’s Court almost always sided with the prosecution, to the point that being brought before it was tantamount to a death sentence. Not surprisingly, it was viewed as a kangaroo court.

Freisler chaired the First Senate of the People’s Court, and acted as judge, jury and prosecution embodied into one man. He also acted as court recorder; that way, he was responsible for the composition of the written grounds for the sentences that he wrote up in his own unique fashion, namely in accordance with his own notions of a “National Socialist criminal court”.

The number of death sentences rose sharply under Freisler’s stewardship. Approximately 90% of all proceedings ended with sentences of death or life imprisonment, the sentences frequently having been determined before the trial. Between 1942 and 1945, more than 5,000 death sentences were handed out, and of these, 2,600 through the court’s First Senate, which Freisler headed. Thus, Freisler alone was responsible, in his three years on the court, for as many death sentences as all other senate sessions of the court put together in the entire time the court existed, between 1934 and 1945.

Freisler was known for humiliating defendants and shouting at them. He was known to be an admirer of Andrei Vyshinsky, the chief prosecutor of the Soviet purge trials, and reportedly copied his demeanor.[10] A number of the trials for defendants in the 20 July Plot before the People’s Court were filmed and recorded. In the 1944 trial against Ulrich Wilhelm Graf Schwerin von Schwanenfeld, for example, Freisler shouted so loudly that the technicians who were filming the proceeding had major problems making the defendant’s words audible. Schwerin von Schwanenfeld, like many other defendants in the plot, was sentenced to death by hanging. Among this and other show trials, Freisler headed the 1943 proceedings against the members of the White Rose resistance group, and ordered many of its members to be executed by Fallbeil, a shorter German version of the French guillotine.

According to one report, Freisler hastily adjourned court and had ordered that day’s prisoners to be taken to a shelter, but paused to gather that day’s files. Freisler was killed when an almost direct hit on the building caused him to be struck down by a beam in his own courtroom.[11] His body was reportedly found crushed beneath a fallen masonry column, clutching the files that he had tried to retrieve. Among those files was that of Fabian von Schlabrendorff, a 20 July Plot member who was on trial that day and was facing execution.[12]

According to a different report, Freisler “was killed by a bomb fragment while trying to escape from his law court to the air-raid shelter”, and he “bled to death on the pavement outside the People’s Court at Bellevuestrasse 15 in Berlin.” Fabian von Schlabrendorff was “standing near his judge when the latter met his end.”[3]

Freisler’s death saved von Schlabrendorff, who after the war became a judge of the Constitutional Court of the Federal Republic of Germany (Bundesverfassungsgericht).

Yet another version of Freisler’s death states that he was killed by a British bomb that came through the ceiling of his courtroom as he was trying two women, who survived the explosion.[13]

A foreign correspondent reported, “Apparently nobody regretted his death.”[11] Luise Jodl, then the wife of General Alfred Jodl, recounted more than 25 years later that she had been working at the Lützow Hospital when Freisler’s body was brought in, and that a worker commented, “It is God’s verdict.” According to Mrs. Jodl, “Not one person said a word in reply.”[14]

Freisler is interred in the plot of his wife’s family at the Waldfriedhof Dahlem cemetery in Berlin. His name is not shown on the gravestone.

Freisler has been portrayed by screen actors at least five times: by Rainer Steffen in the 1984 German television movieWannseekonferenz, by Roland Schäfer in the 1989 British-French-German film Reunion, by Brian Cox in the British 1996 television movie Witness Against Hitler, by Owen Teale in the 2001 BBC/HBO film Conspiracy, by André Hennicke in the 2005 film Sophie Scholl – The Final Days, and by Helmut Stauss in the 2008 film Valkyrie.