allstaractivist note: Unfortunately, I have discovered the below site and it’s host to be a disinformation site. Let the reader continue with caution.

Blogs, websites and personalities that I’ve discovered to be disinformation shills

(born February 11, 1974) is an American radio host, author, conspiracy theorist,[1][2] and documentary filmmaker.[3] Hissyndicated news/talk show The Alex Jones Show, based in Austin, Texas, airs via the Genesis Communications Network on 118 AM and FM radio stations[4]and WWCR Radio shortwave[citation needed] across the United States, and on the Internet. His websites include Infowars.com and PrisonPlanet.com.[5][6] His YouTube channel has been viewed over 360 million times.[7]

Jones has been the center of many controversies, including his controversial statements about gun control in the wake of the Sandy Hook Elementary School shooting.[8] He has accused the U.S. government of being involved in the Oklahoma City bombing,[9] the September 11 attacks,[10] the filming of fake Moon landings to hide NASA‘s secret technology[11] and the killing of “thousands of astronauts”.[12] He believes that government and big business have colluded to create a New World Order through “manufactured economic crises, sophisticated surveillance tech and—above all—inside-job terror attacks that fuel exploitable hysteria”.[13] Jones describes himself as a libertarian and apaleoconservative.

Jones was born on February 11, 1974 in Dallas, Texas,[14] and grew up in the suburb of Rockwall and Austin, Texas. His father was a dentist and his mother a homemaker.[9] In one of his video podcasts, he reports that he is of German, Welsh, mostly[15] British, and partially Native American descent.[15] He was a lineman on his high school’s football team and graduated from Anderson High School in Austin, Texas in 1993.[9] As a teenager, he read Gary Allen‘s None Dare Call It Conspiracy, which strongly impacted him, and which he calls “the easiest-to-read primer on The New World Order”.[16] After high school, Jones attended Austin Community College.[17]

He began his career in Austin with a live, call-in format public-access television cable TV program.[citation needed] In 1996, Jones switched format to KJFK, hosting a show named The Final Edition.[18] During this time Ron Paul was running for congress and was a guest on Jones’s show several times.[19] The two share many beliefs and have been friends since then.[19] In his early shows, he frequently talked about his belief that the U.S. government was behind the Oklahoma City bombing in 1995,[20] using the incident to put down a growing “states rights movement”.[21] In 1998, he released his first film,America Destroyed By Design.

In 1998, Jones organized a successful effort to build a new Branch Davidian church, as a memorial to those who died during the 1993 fire that ended the government’s siege of the original Branch Davidian complex near Waco, Texas.[22] He often featured the project on his public-access television program and claimed that David Koresh and his followers were peaceful people who were murdered by Attorney General Janet Reno and the ATF during the siege.[18]

In 1999, he tied with Shannon Burke for that year’s “Best Austin Talk Radio Host” poll as voted by The Austin Chroniclereaders.[23] Later that year, he was fired from KJFK-FM for refusing to broaden his topics, his viewpoints making the show hard to sell to advertisers, according to the station’s operations manager.[18] Jones stated: “It was purely political, and it came down from on high … I was told 11 weeks ago to lay off Clinton, to lay off all these politicians, to not talk about rebuilding the church, to stop bashing the Marines, A to Z”.[18] He began spreading his show via internet connection from his home.[20]

In early 2000, Jones was one of seven Republican candidates for state representative in Texas House District 48, an open seat swing district based in Austin, Texas. Jones stated that he was running “to be a watchdog on the inside”,[24] but withdrew from the race after a couple of weeks.

In July, a group of Austin Community Access Center (ACAC) programmers claimed that Jones used legal proceedings and ACAC policy to intimidate them or get their shows thrown off the air.[25]

In 2001, his show was syndicated on approximately 100 stations.[20] After the 9/11 terrorist attack, Jones began to speak of a conspiracy by the Bush administration as being behind the attack, which caused a number of the stations that had previously carried him to drop his program.[26]

On June 8, 2006, while on his way to cover a meeting of the Bilderberg group in Ottawa, Canada, Jones was stopped and detained at the Ottawa airport by Canadian authorities who confiscated his passport, camera equipment and most of his belongings. He was later allowed to enter Canada lawfully. Jones said regarding the reason for his immigration hold: “I want to say, on the record, it takes two to tango. I could have handled it better.”[27]

On September 8, 2007, he was arrested while protesting at 6th Avenue and 48th Street in New York City. He was charged with operating a bullhorn without a permit. Two others were also cited for disorderly conduct when his group crashed a live television show featuring Geraldo Rivera. In an article one of Jones’s fellow protesters said, “It was … guerrilla information warfare.”[28]

The Alex Jones Show syndicated radio program is broadcast nationally by the Genesis Communications Network to more than ninety AM and FM radio stations in the United States,[29] and to WWCR Radio shortwave.[citation needed] Live broadcast times are weekdays from 11:00 a.m. to 2:00 p.m. CST and Sundays from 4:00 p.m. to 6:00 p.m. CST. The Sunday broadcast is also broadcast by Emmis Communications‘ KLBJ Radio.

As of 2013, according to Jones, the radio show has over 15 million listeners a week, which would be 2.5 million per day.[30]Also, the show reportedly has a demographic heavier in younger viewers than other conservative pundits.[26] In 2011, he had a larger on-line audience than Glenn Beck and Rush Limbaugh combined.[31] Author Will Bunch says that Jones was in part a model for Glenn Beck who “synthesized” some of the paranoia of Jones’s commentaries into his persona.[26]

Jones is also the operator of several websites centered on news and information about civil liberties issues, global government and a wide variety of current events topics. As of February 2014, his YouTube channel,TheAlexJonesChannel, has received more than 360 million views and 828,000 subscriptions.[7]

He has been able to mobilize his followers to create Google bomb actions that bring particular terms to the top of a search engine listing, a tactic which has then inspired other online media, such as the Drudge Report, to cover the story.[32]

Jones has expressed a skeptical view of human-induced climate change, describing the underlying science as deceitful and merely a means for global governance and global redistribution of wealth.[33] 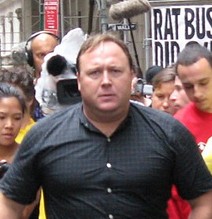 Mainstream sources have described Jones as a conservative,[34][35][36][37] a right-wingconspiracy theorist,[38][39][40][41] and a libertarian.[42] Jones sees himself as a libertarian and rejects being described as a right-winger.[43] He has also called himself apaleoconservative[44] and an “aggressive constitutionalist“.[45][46]

Jones has been the center of many controversies, such as the controversy surrounding his actions and statements about gun control after the Sandy Hook Elementary School shooting.[8] He has accused the U.S. government of being involved in the Oklahoma City bombing[9] and the September 11 attacks.[10] Jones was in a “media crossfire” in 2011, which included criticism by Rush Limbaugh, when the news spread that Jared Loughner had been “a fan” of the 9/11 conspiracy film Loose Change, of which Jones had been an executive producer.[31]

In January 2013, Jones was invited to speak on Piers Morgan‘s show after promoting an online petition to deport Morgan due to his support of gun control laws.[47] The interview turned into “a one-person shoutfest, as Jones riffed about guns, oppressive government, the flag, his ancestors’ role in Texan independence, and what flag Morgan would have on his tights if they wrestled”.[47] The event drew widespread coverage,[47] and according toThe Huffington Post, Morgan and others such as Glenn Beck “agreed that Jones was a terrible spokesman for gun rights”.[48] Jones’s appearance on the show was a top trending Twitter topic the following morning.[49]

On June 9, 2013, Jones appeared as a guest on the BBC‘s television show Sunday Politics. After a discussion about conspiracy theories surrounding the Bilderberg Group meetings with presenter Andrew Neil and journalist David Aaronovitch, a critic of such theories, which was dominated by Jones’s shouting and regular interruptions, Andrew Neil ended the item, describing Jones as “an idiot”[50] and “the worst person I’ve ever interviewed”.[51][52] Jones was still shouting, according to Neil on Twitter, until he knew he was off-air.[50][51]

Alex Jones and fans at the Première of A Scanner Darkly, a film by Richard Linklater, in which Jones has a cameo.[20]